transforming encounters with the story

Three scenes from my recent week of speaking at events on the campus of University of Groningen in the Netherlands:

Scene One
Monday afternoon I spoke with a Muslim student after my talk about whether we can know anything about God.
She told me that she loves being among Christians as her questions are welcomed and she is given space to explore her questions about God.
She then asked me if I could help her with a question: Why do Christians hold Jesus in such affection? What is that provokes this love on their part?
I shared with her how Jesus shows us God come close to us and a God who both invites us to know him and also makes a way for this to happen. 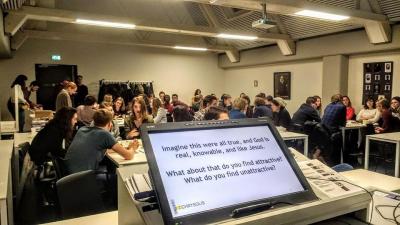 Scene Two
Thursday afternoon I was approached by the president of the local LGBTQ+ society after my presentation on life after death.
One of his friends, a transgender student, had asked me – during the Q&A session afterwards – what I thought about the church’s attitude to LGBTQ folk.
I replied that I didn’t think the church had handled the issue well or in a manner reflective of Christ.
I talk about the human tendency to see everyone else as outrageous sinners and ourselves as righteous, when the bible says we’re all sinners.
I said that Christians and LGBTQ people both need to stop lobbing verbal grenades at one another and get to know each other, trying to understand one another, as in my experience neither one really understand where the other is coming from.
When the president of the LGBTQ+ group approached me, he told me that he really appreciated my response, and we had a lovely chat for an hour about God and about his experience of life and religion. 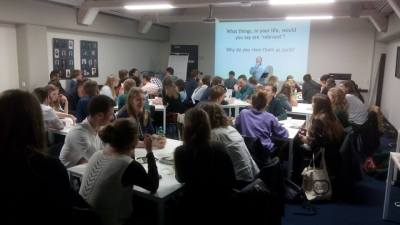 Scene Three
Thursday evening an atheist student asked a tough question about science and God after my talk on purpose in life (below) and I gave an OK-ish answer to it.
I could see he wanted to pursue the question further, but I also sensed that others in the room wanted the Q&A time to end.
I said that anybody who wanted to keep discussing this issue was free to join me around a table at the front.
The moment I stopped speaking there was a scramble of students heading forward to join the conversation and we were all in intense but good-humoured discussion.
Within twenty minutes the atheist student had decided to start reading the Bible regularly with someone from the Navigators Christian group.
Reflections
In between Monday and Thursday we talked and interacted with all kinds of other students – Hindu, Buddhist, nominally Christian, agnostic, not really anything, etc. – and we kept on finding folk who were open and interested to discuss Jesus with us.
It is striking how the very people many Christians assume are most closed to the message of Jesus – Muslims, convinced atheists and LGBTQ+ people – are actually quiet intrigued by him when given an appropriate opportunity to consider him and his claims.
Every time I speak with Christians I find many assume those outside the church are disinterested in God. Every time I engage with non-Christian audiences I find quite the opposite to be true.
It’s a good time to be presenting Jesus to student audiences. It’s not easy. But it’s tilting towards openness and God is distinctly at work.